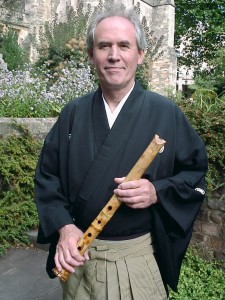 Michael Soumei Coxall studied shakuhachi under Yamaguchi Goro (1933-99) in Japan from 1979 to 1984 and continued his studies with him on frequent visits to Japan until 1999. Yamaguchi Goro was the head of the Chikumeisha branch of Kinko-ryu shakuhachi, which is the oldest existing shakuhachi lineage, and was the youngest ever performer to be designated as a `Living CulturalTreasure` and played the most wonderful music. Since then, Michael has continued to study sankyoku (music to accompany koto and shamisen repertoires) and honkyoku (traditional solo pieces) under Mizuno Kohmei, one of Goro-sensei`s foremost students, and received his Shihan (Master`s Licence) in 2007 and the name of Soumei. Since 2007, Michael has also been learning shinkyoku (new music) from Sugawara Kuniyoshi in Japan.

From 1986 to 2009, Michael taught full-time at the School of Oriental and African Studies (SOAS), University of London, and took over teaching shakuhachi there from Iwamoto Yoshikazu from 1992 onwards. As well as teaching degree students, together with the shamisen player, Arisawa Shino, he set up and taught at the Japanese Music Society in SOAS for many years and together with Kiku Day in 2006 jointly established the European Shakuhachi Society (ESS), a UK registered charity to promote an understanding and dissemination of shakuhachi throughout Europe and has been running and teaching Shakuhachi Summer Schools in London with Kiku since then.

For the past 7 years, Michael has been performing regularly with the Hibiki Ensemble in the UK together with the koto and shamisen performers Kitamura Keiko and Onishi Masako. Since leaving SOAS, he has been teaching shakuhachi privately and performing as well as visiting his teachers in Japan.